​In 2020 the Voelker lab will be starting a new NSF-funded research project aimed at reconstructing winter climate at atmospheric variability (i.e., Jet Stream Waviness) across North America at annual resolution over the past 500+ years. The Voelker lab will be developing long stable isotope chronologies from white pine near Lake Superior. Fieldwork will be undertaken at the Huron Mountain Club, which includes the largest privately owned old growth forests in the Eastern United States as well as the wilderness of Isle Royale National Park, a UNESCO Biosphere Reserve . In parallel, the Griffin Lab [U of MN) will be further developing blue oak chronologies in California, and finally Simon Wang (USU) will be providing expertise and training to students in state of the art analyses of climate dynamics.

Much of this project is product of the Voelker lab traveling to Lake Superior region to collect tree cores from the Turkey Lakes Watershed and the Huron Mountain Club, where we have developed tree-ring isotope chronologies that tell us about past climate and ecophysiology. Below is a collection of photos of Chris Ratcliff, Leonard Voelker (Dr. Voelker's esteemed father) and myself collecting cores from submerged logs and driftwood.
The Voelker lab is researching the impacts of western harvester ants and invasive cheatgrass on climate responses of sagebrush at the NEON site in Utah. Below are pictured data collection in sagebrush (top left) an ant mound in a large patch of invading cheatgrass (top right) and a group photo (below) featuring [left to right) Ben Yan, Dr. Lu Yan, Dr. Steve Young, Cody Dangerfield and Maria Catalano. 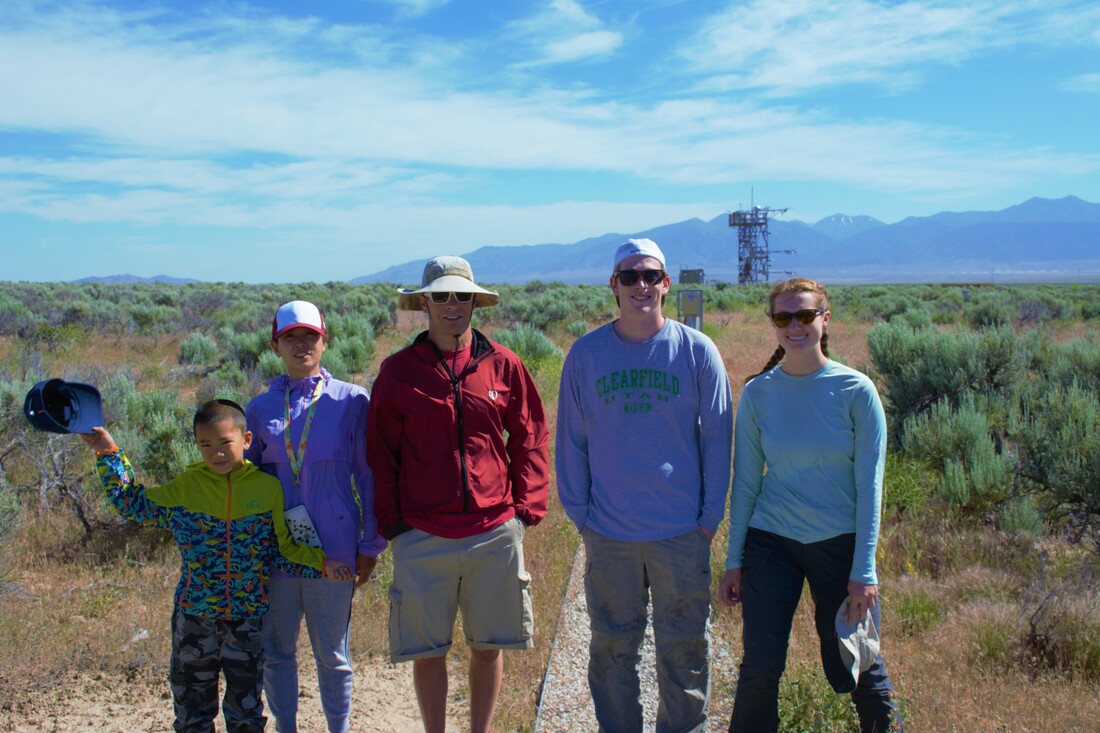 Voelker lab research project is being funded by the Save the Redwoods League. This research is being led by Cody Dangerfield, who is pursuing his MS degree. He is investigating the distance at which roads can cause dieback in old growth redwoods and if certain geomorphic conditions mediate or exacerbate these effects.  ​Pictured from left to right are Chris Lee [Cal Fire forest pathologist for NW California], Cody Dangerfield and Nick Kremp. 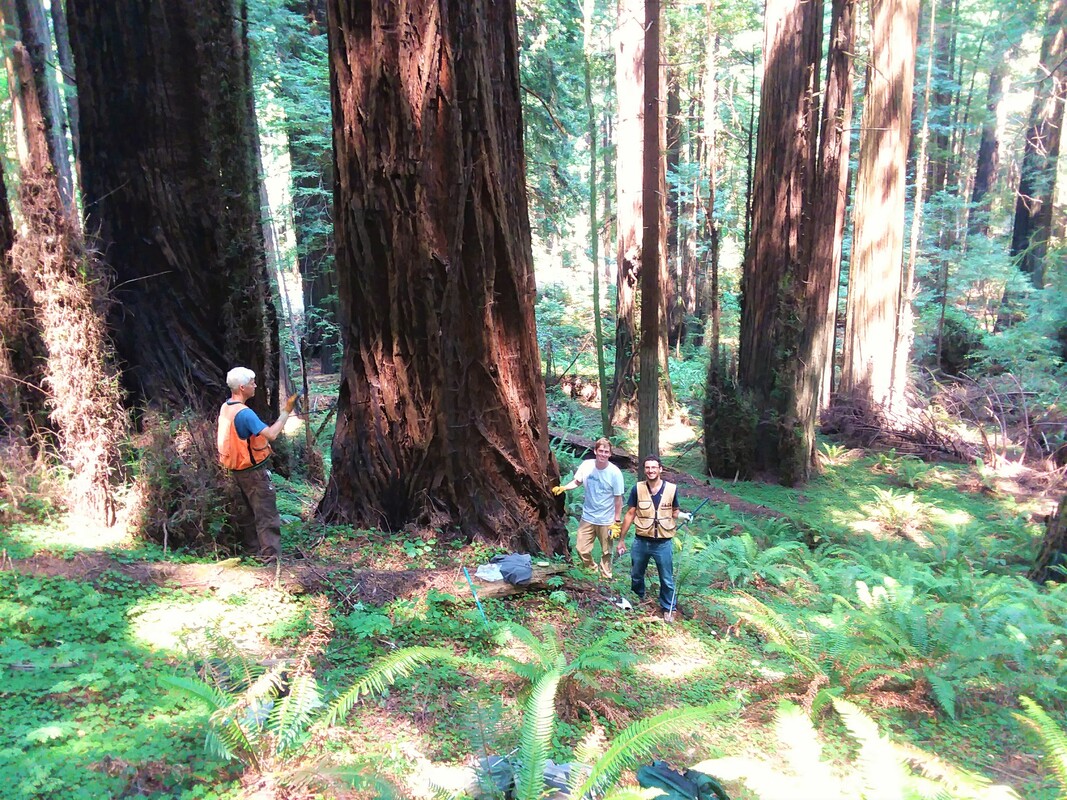 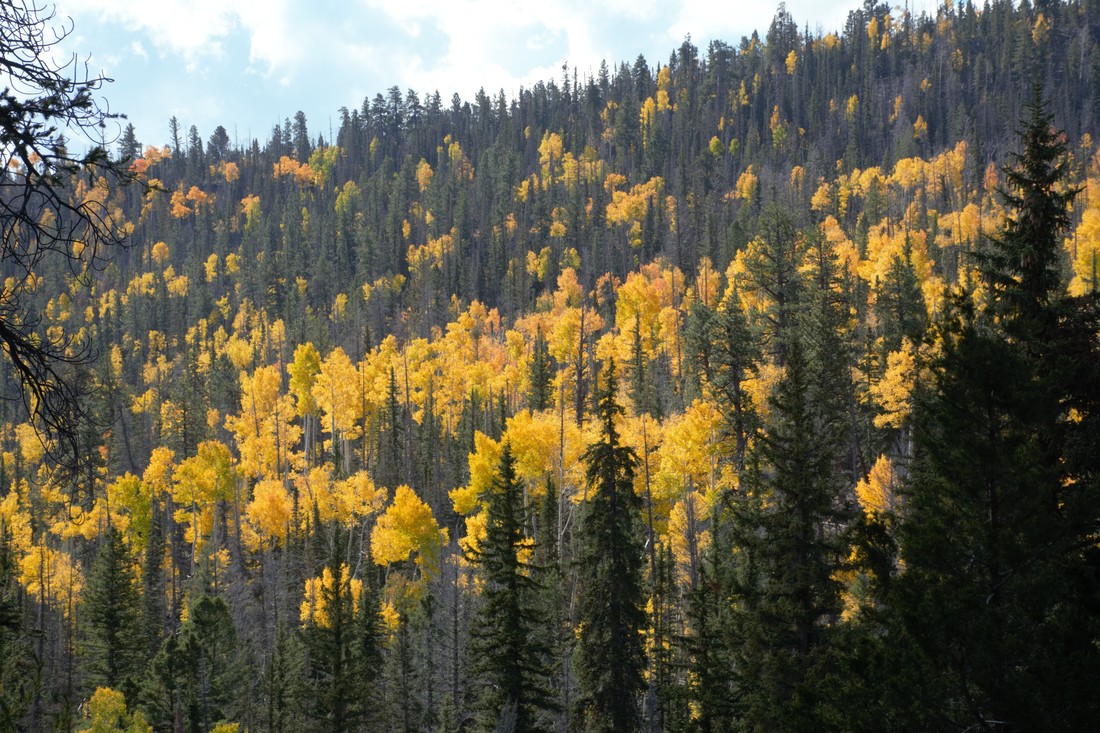 Jessika Pettit, contributed to the Voelker Lab and defended her MS thesis in the summer of 2018, found that drought stress did not significantly contribute to bark beetle outbreaks in Engelmann spruce. In turn, this suggests previous reports linking drought conditions to beetle outbreaks were mistakenly based on how warmer temperatures, often associated with drought, helped beetle populations grow independent of tree (host) vigor. This new finding will be important for simplifying predictions of what climate and ecological conditions contribute to landscape-scale spruce beetle outbreaks. The stand shown above has a strong aspen component that has been thriving after bark beetles killed most of the trees. Subalpine fir, Douglas fir and blue spruce were also present in this stand near the low-elevation range edge of Engelmann spruce. 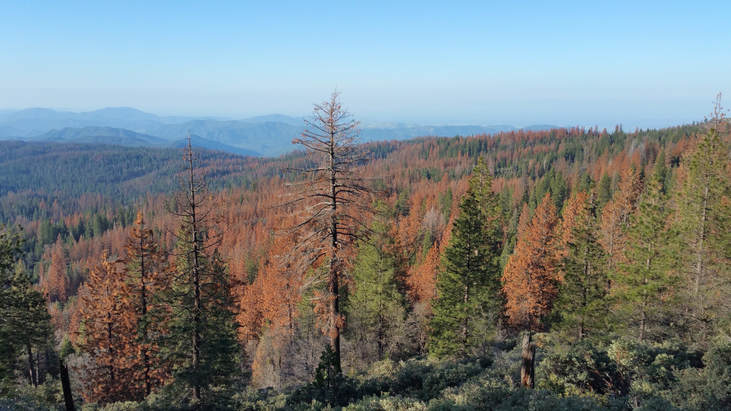 ​The "California Drought" has killed millions of trees. The most widespread mortality occurred in the southern Sierra Nevada Mountains, where western pine beetle killed most of the ponderosa pines present as well as some other tree species
(Photo: spring 2017, near Shaver Lake) 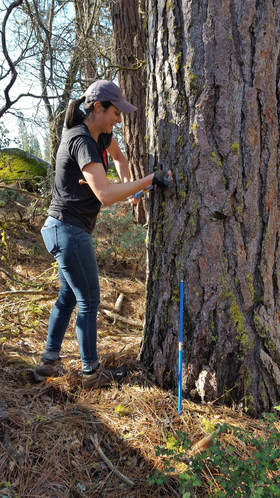 ​Rachel Keen is pictured at left, coring a ponderosa pine tree in the southern Sierra Nevada Mountains. She is investigating whether ponderosa pine trees that survived a western pine beetle outbreak have tree-ring isotope and tree growth signatures that are different from the majority of the trees that died during the outbreak. Her research is being conducted adjacent to flux tower sites belonging to the NSF-funded Southern Sierra Critical Zone Observatory and NSF-funded NEON. 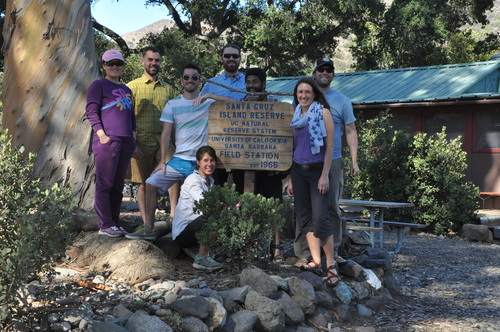 Pictured here is a collaborative research group photo from a November 2014 data collection trip to Santa Cruz Island, where we characterized patterns of mortality and survival across the rugged topography of the island. 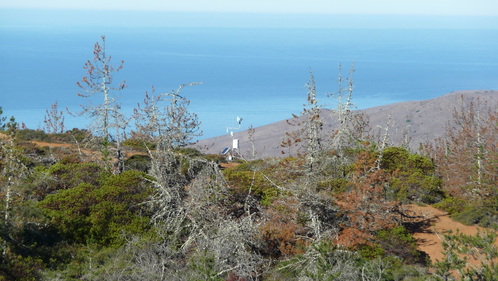 Mortality of the Bishop pines was striking -- here dead trees flank a met station positioned on a shoulder ridge with the Pacific ocean in the background. About 35% of all adult trees died between 2012 and 2014. Most of the adult  Bishop pine trees on the island have died since then. 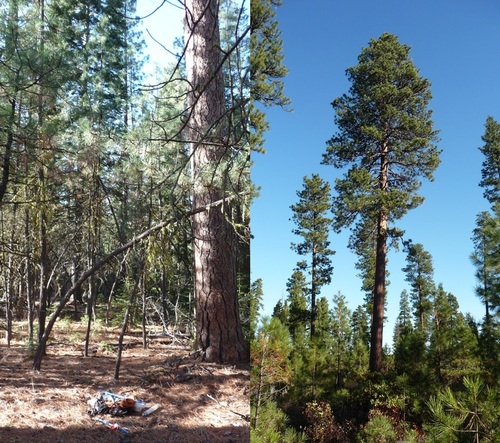 Carbon allocation to stems versus roots

To the left are two adjacent ponderosa pine stands near Black Butte, Oregon. On the left is the control stand and on the right is the "shelterwood" stand. The shelterwood stand is more open because it underwent a heavy cutting in 1987. This treatment greatly decreased seasonal drought stress and increased tree growth. We have also been studying a wet forest ecosystem on the Oregon coast where carbon availability has been similarly modulated. 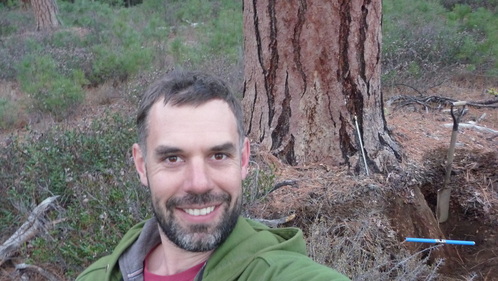 Selfie in front of a pine that was 125cm (~4ft) in diameter. In the background is a root excavated to take a core sample for dendrochronological dating and growth comparisons to the trunk. Digging and coring large roots is arduous work! Although the coarse roots and trunks are separated by only 1-2 m, the roots are much more sensitive to environmental change than the trunks, indicating projections of carbon allocation in forests need to represent this variability. 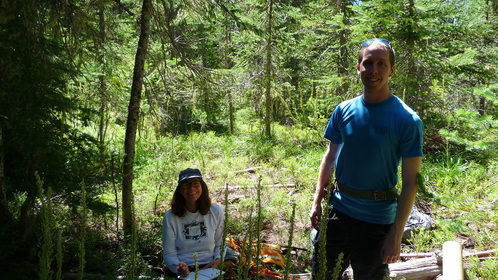 Pictured here are Anne Nolin, a snow research expert, and Chris Ratcliff, then a senior in the BioResource Research program at OSU. He has since graduated but this was his undergraduate thesis project. We sampled trees near the McKenzie Pass and Santiam Pass SNOTEL stations. 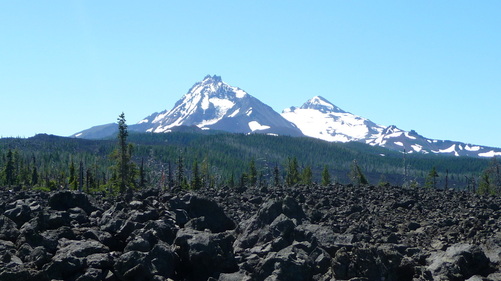 Snowpacks like that shown here on North and Middle Sister mountains supply water to cities, for agriculture and hydropower. However, snowpack is declining across the western United States. Record low snowpacks during recent years have caught national attention, largely due to the extreme drought in California and the realization that these snowpacks provide much of the water that sustains urban centers and agriculture in the western United States. 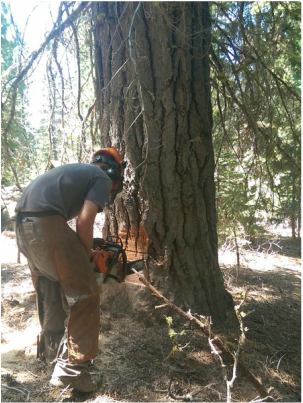 The Voelker Lab has been collaborating with the Center for Advanced Forest Ecosystem Research, located within the US Forest Service PNW research station. This research on dry mixed conifer forests of central Oregon shows that 100 years of fire suppression have made trees more sensitive or less resistant to drought and thereby these landscapes will be less resilient to future disturbances. Our first paper on this is in review at the journal Global Change Biology. Other primary researchers include:  Dr. Rick Meinzer, Dr. Tom Spies, Dr. Chris Still and Andrew Merschel.

To the left is Andrew Merschel, collecting a wedge from an old grand fir that we are currently analyzing for tree-ring carbon stable isotopes.