THE VOELKER LABORATORY
Below is a tour of images and videos from our Millennium Redwood Project that was funded by the National Science Foundation Paleo Perspectives on Climate Change (P2C2) program from 2012-2016.

We have used cores and slabs from the Redwoods State and National Parks.  We cross-dated their tree-rings to known calendar years and are using the stable isotope ratios (13C/12C and 18O/16O) in those rings to reconstruct climate variability over the past 1100 years.

In 2018 our findings were published in the Journal Oecologia, and were recently summarized, with quotes from Dr. Voelker by Utah Public Radio in a story called "Hidden Climate Records Within Trees". 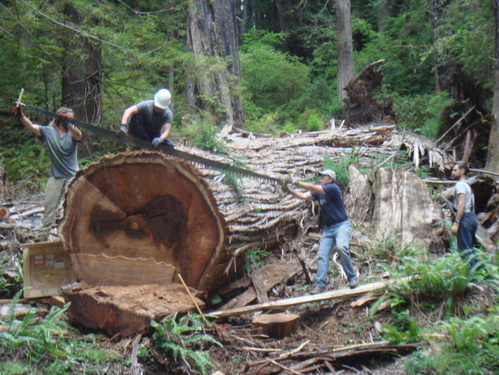 From left is Shawn Gerrity (a volunteer), Ken Olejar (lab manager 2012-2013) and Dr. John Roden starting to saw a slab from a large tree in Prairie Creek Redwoods State Park. I am at the far right [supervising]. All trees shown being cut  were after gaining written permission from the parks -- otherwise collecting any wood from these parks is illegal! This tree had fallen just one year previous to our cutting in 2012 and dendro-dating put the first ring formed at 517 AD. The cutting, at 30m distance from the root crown, means the tree was at least 1500 years old and probably closer to 1600 years old when it fell. 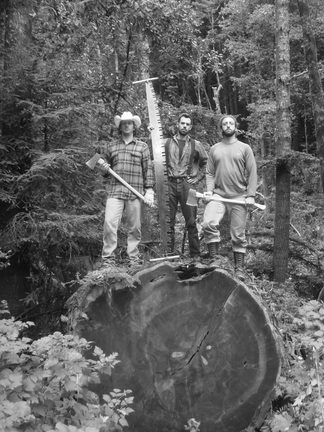 From left: Travis Roth (a colleague/volunteer), myself and Shawn at a tree in Del Norte Redwoods State Park [historic stoic logger pose]. Dendro-dating put this tree's date of death in the winter of 2008/09 with its first ring at 260 AD (1748 years). The face shown was at 30 m distance from the root crown so it was surely more than 1800 years of age when it fell. 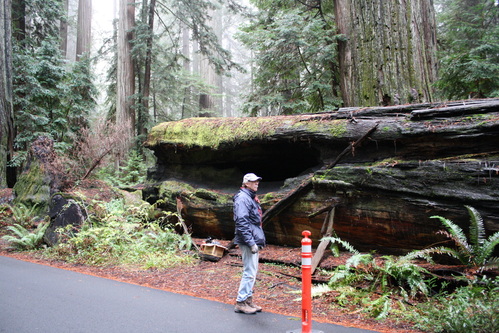 Dr. John Roden in front of one of the biggest trees we sampled in Humboldt Redwoods State Park. Although it looks very wet during this wintertime sampling, the large fire scar/cavity behind John provides stark evidence that this tree lived through a number of intense wildfires. Most evidence puts the fire return interval for redwood forests at only 15-20 years. 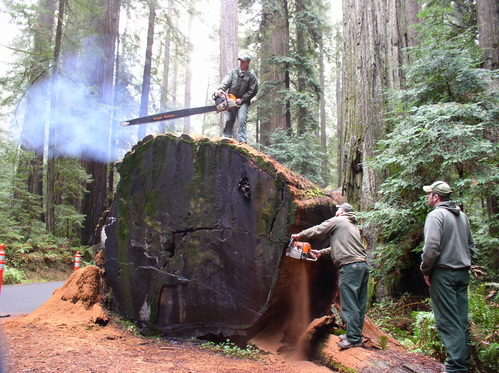 The same tree from above, with the Humboldt Redwoods trails/maintenance crew helping us out with their gigantic power saws. Dendro-dating put this tree's year of death in 2002 and its first ring formed at 598 AD (at least 1404 years old when it fell). 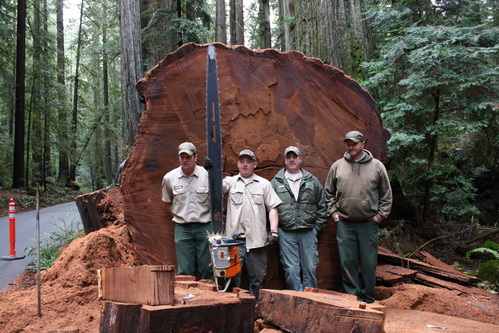 The full crew after they finished this first big tree of the day. Notice that samples fall off as mega-puzzle pieces rather than as a whole slab. That is good and bad. It would be nice to have  a complete slab to display but we would not be able to move it without heavy machinery, particularly at this early stage when the wood is still very wet and very heavy. 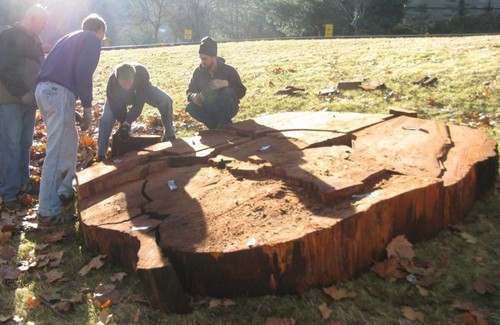 Here we (Ken, John, Robert & myself) are re-assembling the puzzle pieces after unloading them from a U-Haul truck at Southern Oregon University. 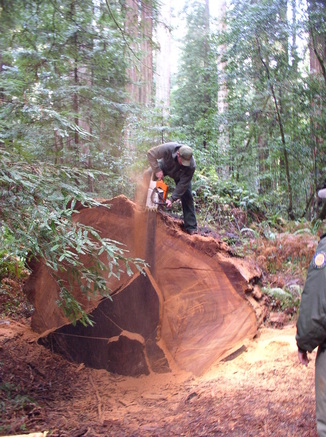 Another big tree we deemed "the egg" from Humboldt Redwoods. Dendro-dating put this tree's year of death in 1996 and its first ring formed at 450 AD (at least 1546 years old when it fell). 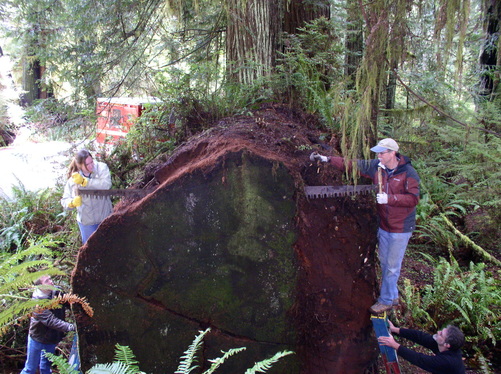 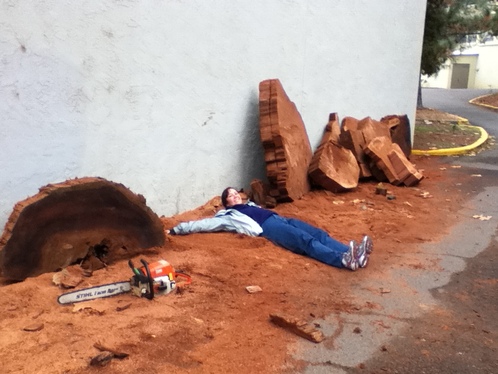 Here we find Lin Roden (esteemed Isotope Ratio Mass Spectroscopy lab manager) making a sawdust angel. The sawdust pile is from all of the re-cutting necessary for the pieces to be light enough to  re-position during tree-ring measurement, laboratory analyses and archival. 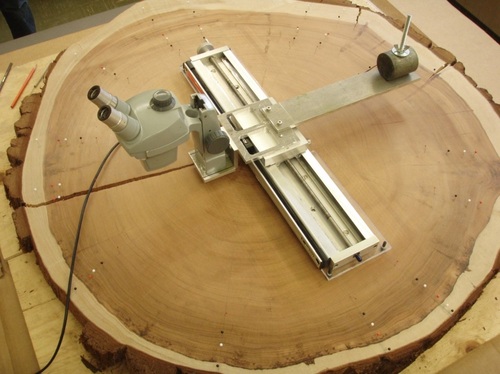 Here is a key piece of our tree-ring measurement system for redwoods (custom built by Ken Olejar, our lab manager at the start of the project). It was constructed so we could move the stereo microscope over the wood. Usually wood pieces are moved on the track shown below a fixed microscope but our massive pieces of wood precluded this convention. The sample shown is the smallest cross-section we used. It was given to us by Dr. Steve Sillett and his lab at Humboldt State University. The tree had grown in Redwoods National Park before it fell over a trail and was cut to restore visitor access.
Below are three videos of our group using a 12-foot cross-cut saw to harvest slabs from Prairie Creek Redwoods State Park (with permission). None of us were very experienced so it took five us one full day to cut slabs from the two trees shown. Both trees were about 8 feet in diameter and were over 1200 years old. We used the cross-cut saw because chainsaws are not allowed for use in the redwood state and national parks during the summer breeding season for the marbled murrelet, a sea bird that nests in old growth trees. This was our first time collecting slabs and it would have helped greatly to have some scaffolding or ladders to elevate the saw equally on both sides and thereby help get the saw started on these massive logs.