THE VOELKER LABORATORY
This first series of pictures are from NSF-funded research for a proposal to Dr. Voelker and collaborators: Dr. Barb Lachenbruch [OSU], Dr. Rick Meinzer [USDA Forest Service], Renee Brooks [US EPA], Rich Guyette [U of Missouri] and Mike Stambaugh [U of Missouri]. Dr. Voelker sampled oak tree-rings and leaf gas exchange responses across continental climate gradients to investigate climatic controls on tree growth and wood anatomy as well as stable isotope signatures fixed in the leaves during photosynthesis and then transferred to the wood cellulose. Determining these climate responses set the stage for interpreting the climate dynamics during the last deglaciation (10,000 - 14,000 years ago) by using sub-fossil oak logs recovered from stream banks in Missouri. For a slide show of sub-fossil oak collections you should check out the University of Missouri tree-ring website﻿. 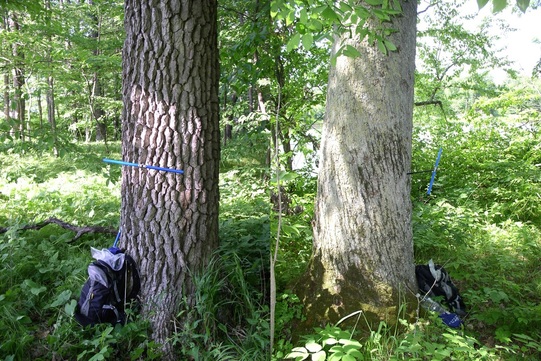 Here are a pair of 200+ year-old bur oaks growing near the St. Croix River in northern Wisconsin, which is near the northern range edge for this species (see map below).
Note the extreme difference in bark thickness in these trees. Bur oak is usually characterized by deeply furrowed bark (i.e, tree on the left). This trait can help protect it from damage by fires or in this case, perhaps from damaging ice flows during spring flooding of the river (many trees showed ice damage near their bases). 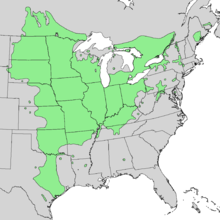 The range map for bur oak (Quercus macrocarpa) shows that it has a broad ecological amplitude.  This species can live in locations with extremely cold winters such as Northern Minnesota and North Dakota and near Winnipeg, Canada. However, it apparently does not compete well with other tree species in areas with high snowpack and/or cool and wet summers as seen near Lake Superior, northern Lake Michigan and Lake Huron. Part of this may be a direct effect of a cool summer climate, but indirect effects are likely strong too because of reduced fire return intervals in those wetter regions. 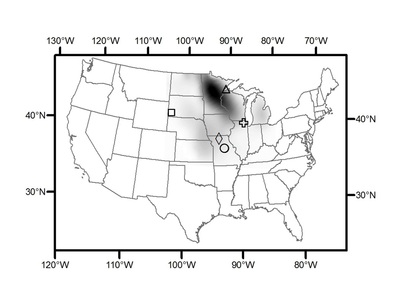 Note that the presence of the tree across the entire range, as shown above, does not mean it is common across the entire range. To the left is a krieged estimate of the abundance of bur oak using Forest Inventory and Analysis data. The darker areas represent greater abundance of this species. Symbols represent sampling locations for trees or paleoclimate data. This map was produced by Mike Stambaugh for a manuscript we have in prep. 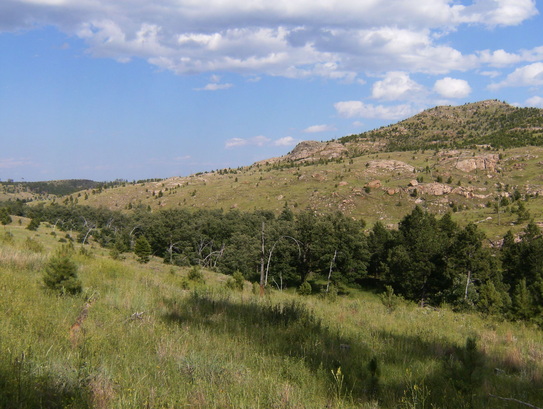 This remote valley, Bear Gulch, in Custer State Park, South Dakota, was full of old bur oaks and a few paper birch trees. This location is on the very western and dry edge for this species. An intense crown fire [the Galena Fire] swept across this landscape in 1988. This is the same year that much of Yellowstone National Park burned and drought spread across the Midwest. The ponderosa pine forests surrounding this valley burned so hot that little if any evidence is left from the fire. However, the bur oaks within the riparian corridor show no few signs of fire damage. 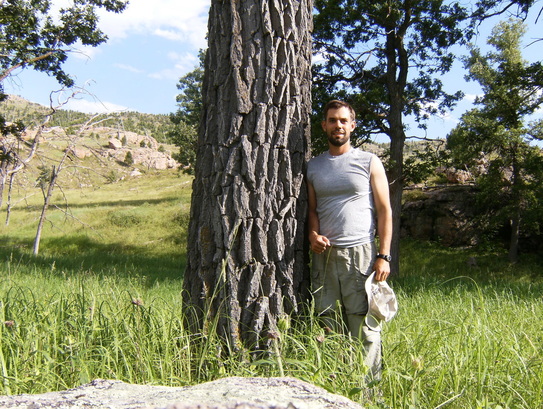 Here, again, you can see the thick bark that protected this oak from from the severe fires that swept across this valley during the drought of 1988. A few younger oaks in the background were killed by the fire. 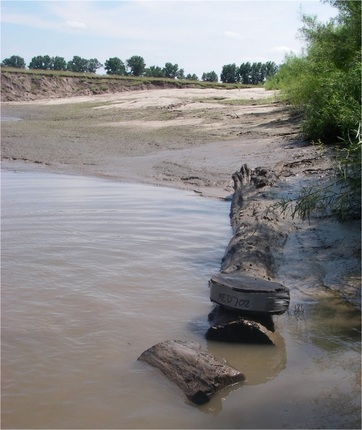 This photo shows a sub-fossil oak log in Medicine Creek, located in northern Missouri. This sample, MED702, was radiocarbon dated to between 13,124 and 13,378 years BP (i.e. before 1950). At this time the North American glaciers were quickly receding before the climate again cooled and glaciers re-advanced during the Younger Dryas. Through investigations of the wood anatomy, growth patterns and stable isotopes of logs such as this we have established unique climate records from this dynamic deglacial period. 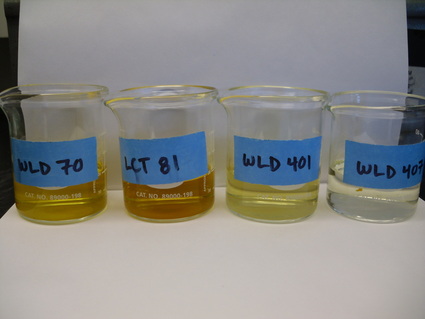 These beakers contain cellulose nitrate from sub-fossil oaks (they grew 10,000-14,000 years ago) that has been dissolved in acetone. Variation in color is due to impurities such as iron that can build up in the logs while buried below the water table for thousands of years. 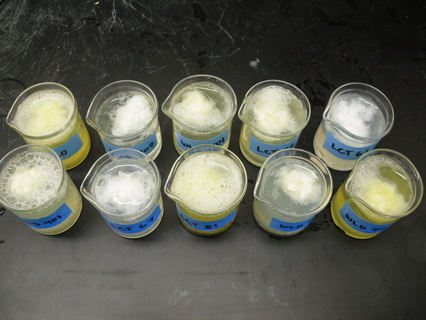 Some of the same beakers show the pure cellulose nitrate (looks like a wet cotton ball) after being precipitated out of solution. This cellulose nitrate can be used for analysis of deuterium, the stable isotope of hydrogen, because the exchangeable hydrogens on the cellulose molecule have been replaced with nitrate groups. One aside from this ecology/biochemistry is that cellulose nitrate was used as an early explosive, so you do not want to carry these samples through a security checkpoint at an airport.
Below is a series of images from my work in Panama at the Smithsonian Tropical Research Institution (STRI) and associated canopy cranes with Dr. Kate McCulloh (U of Wisconsin), Dr. Dan Johnson (U of Idaho), Dr. JC Domec (Bordeaux Sciences Agro, Duke, NC State) as well as Dr. Rick Meinzer, Dr. Barb Lachenbruch, Dr. David Woodruff and other collaborators.  The work I did with the group occurred on three trips from 2005 to 2010.

Dr. Kate McCulloh spearheaded the research efforts in Panama. She is pictured below in the field after harvesting a young balsa tree (left) and back in one of the labs at STRI with some it's massive leaves collected for leaf hydraulic measurements (click this link for a nice article on Panama's balsa trees from National Geographic ). 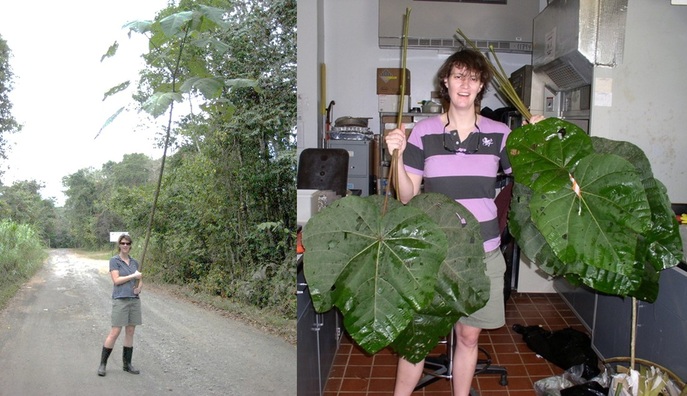 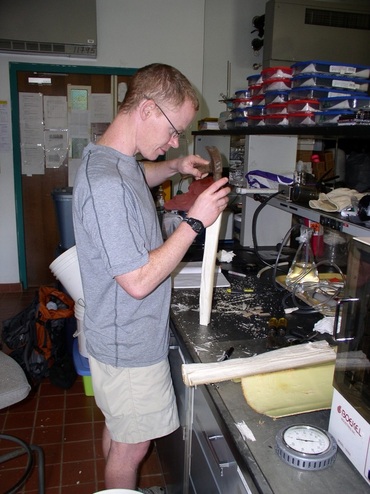 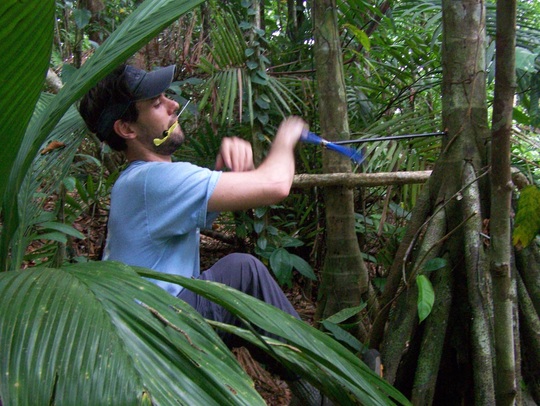 Here I am pictured taking a core sample from a "walking palm" (genus Socratea) so we could analyze the vascular anatomy. Palms are extremely hard on the outside and difficult to core. 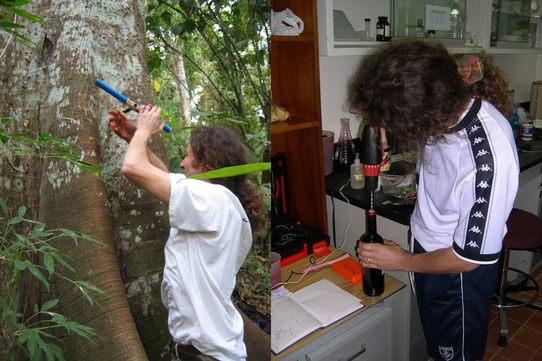 Whether it is coring tropical trees for a dye ascent study or opening a bottle of wine without an opener after a long day's work, Dr. JC Domec is always glad to demonstrate the proper techniques. He encourages everyone to be very careful not to mix up the Shiraz with the Safranin solution, because, after all they are nearly the same color but safranin does not taste good at all and wine does not work to stain wood and demarcate xylem functionality. 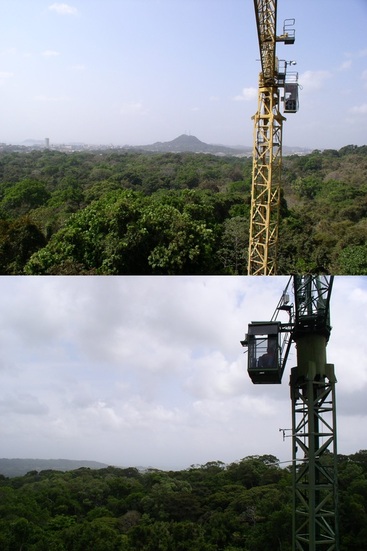 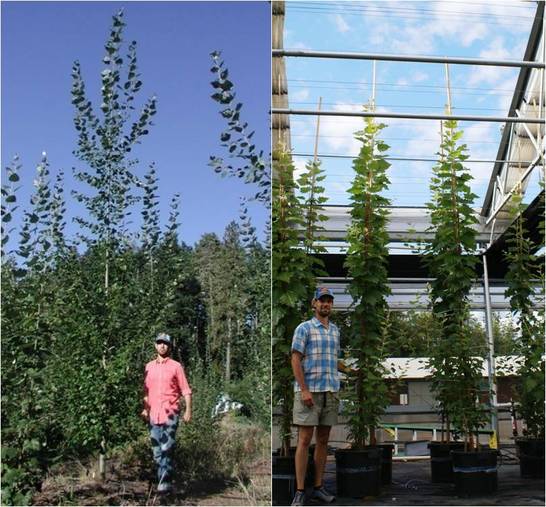 For my PhD [2004-2009] I studied a wildtype and 14 transgenic lines of poplars that had various levels of lignin down-regulation. I worked with the lab group of Dr. Steve Strauss and many other collaborators to complete these studies.
The ultimate aim of this type of technology is to design trees with wood that needs less energy and fewer hazardous chemicals to process to pulp [for paper] or convert into biofuel. The trees were grown in the field or in the greenhouse. The latter, on the right, were staked to reduce the biomechanical stresses due to wind. This provided two very different growth environments with which to judge wood formation and resulting tree physiological function. 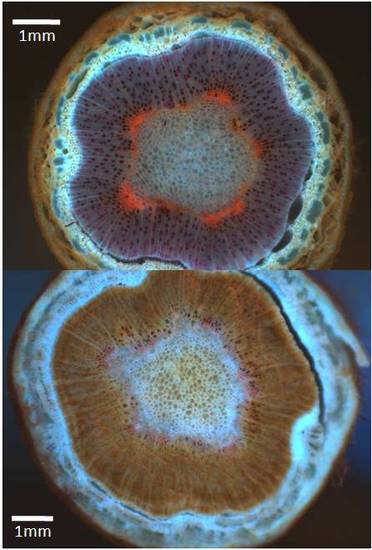 These twig cross sections show how water, as indicated by the red-fluorescence of dye, moved through the wildtype trees (top) very well but in the trees with the lowest lignin contents (bottom) the wood was dark brown in color, the cells were malformed and they transmitted very little water as indicated by a slight pinkish color around the pith. This was an unforeseen consequence of modifying the 4CL step of lignin synthesis. It may be possible to alter another step or use a slightly different approach to create trees with lower lignin but wood that functions more efficiently. 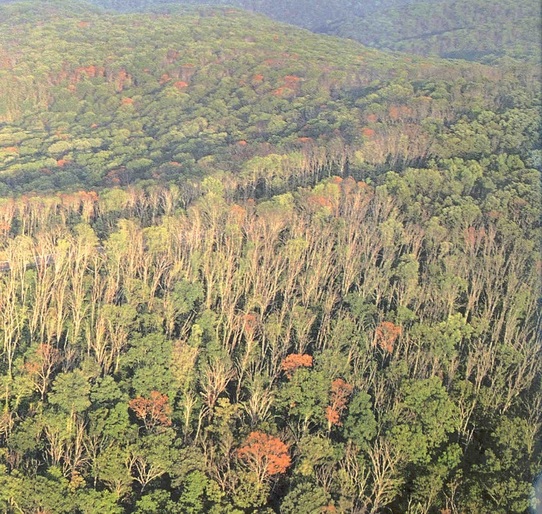 For my M.S. degree (2002-2004) I studied forest stand dynamics in response to repeated droughts, oak decline, tree age and geomorphology in Ozark oak forests. Much of this research was based on long-term forest inventory plots that were part of the Missouri Ozarks Forest Ecosystem Project. To the left is an aerial view of severe oak mortality and decline in the Ozark highlands from the early 2000's. 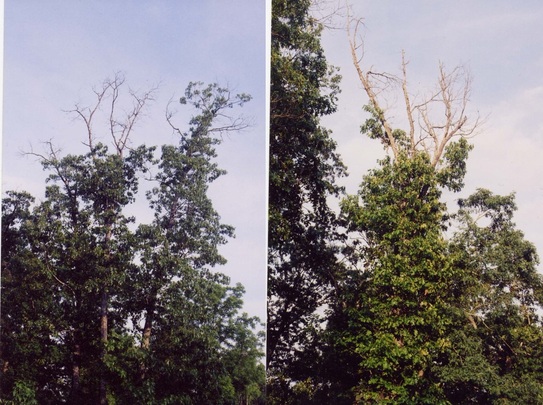 To the left are two images of trees in various stages of oak decline. The trees on the left have all their fine branches intact, indicating they underwent shoot dieback recently within 1-2 years previous to the photo. The tree on the right has a number of large branches that have died without fine branches attached as well as a column of epicormic branches along its main trunk, indicating it is at a more advanced stage of oak decline, probably starting at least five years previous to the photo. 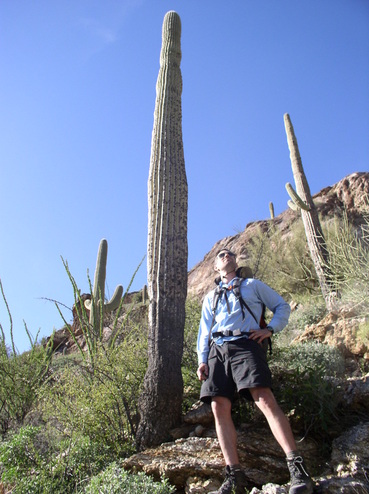 In the spring of 2010 I was a visiting scholar at the University of Arizona's Laboratory of Tree-Ring Research. This opportunity not only afforded me some sunshine after a long and cloudy Oregon winter, but I was able to form some connections with other scientists there including my host, Steve Leavitt. While there I spent a lot of time underneath the University of Arizona football stadium, where the dendro collections were then archived. I was able to investigate many old collections and collect metadata that were necessary to estimate tree ages from tree-ring series data archived on-line at the International Tree-Ring Data Bank (ITRDB). Establishing this relationship allowed me time to finalize a set of global tree-ring analyses that I would later publish as a book chapter. 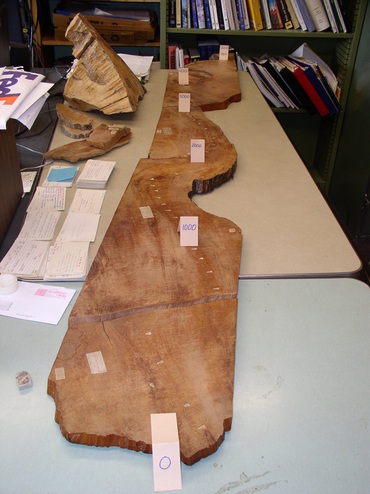 While at Arizona I shared an office with cuttings from the infamous Currey Tree, the oldest known individual tree to ever be cut down. The placards I arranged along the length of the pieces to the left show the approximate age of the tree along one radii in 1000 year increments, out to ~5000 years of age when it was cut in 1964. Although the cutting of this tree was terribly unfortunate, I find the topic of the maximum ages of trees of any species to be fascinating. I even hold a few records or near-records for the oldest tree of a given species. Two websites keep track of these sorts of data -- Oldlist and eastern Oldlist. 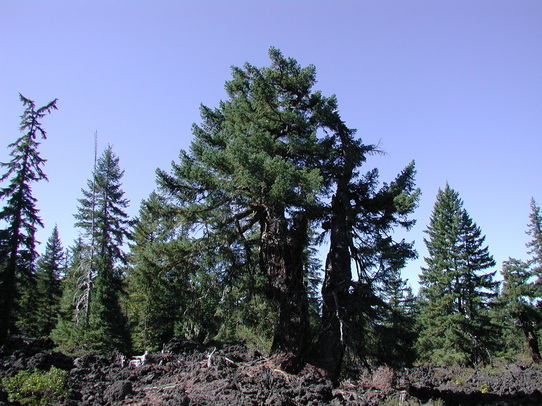 One place I have often visited to try and locate ancient Douglas-fir trees is the Santiam Pass lava fields in Oregon. This tree is the current record holder at just over 1000 years in age. Juniper trees in the high desert ecosystems of eastern Oregon can exceed 1500 years in age, but this is the oldest known tree on the west side of the Cascade crest. 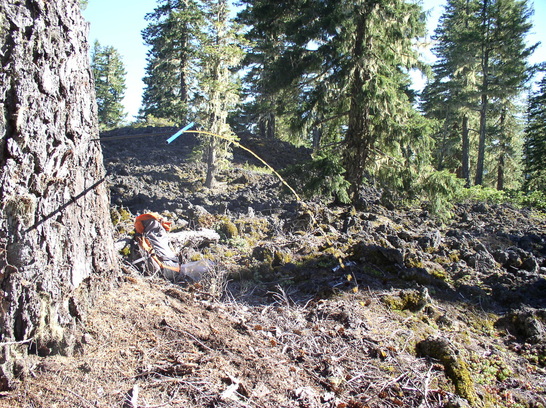 An occupational hazard of coring old trees are those with rotten centers (i.e. "heartrot" or "butt-rot", neither of which has a good connotation). The water spouting of the corer pictured here is from the center of a big tree. It is not hydraulically connected to the xylem sap flowing from the roots to the leaves, but was produced by microbial respiration as the tree rotted from the inside. The water has a rather unpleasant odor, and in these large old trees it can run out of a corer for 10 minutes or more, preventing one from removing the corer unless they want to get wet and smelly.